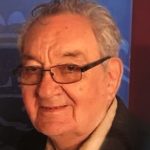 Joe, an Ace aviator, was born in Wilkes-Barre, a son of the late Emilio and Edwina Gagliardi Baratta. He was a graduate of Wilkes-Barre Township High School.

At an early age, Joe was greatly influenced by Charles Lindbergh’s flight and became interested in flying. His family even had a dog named “Lindy.” Joe served with the Army National Guard in World War II working on aircraft in Middletown, PA. It was there that he met his future wife and the love of his life, Doris Rupp.

After the war, Joe and his family moved back to Wilkes-Barre, where he worked for over 20 years for Ford Motor Twins. In 1970, Joe returned to his true love flying. Over the years he served as a private pilot for Triple J. Communication Broadcasting, Medico Industries and Beltrami Industries.  He also served many families flying patients in medical emergency’s out of the area for medical treatment. Joe was awarded the Wright Brothers Master Pilot Award for 50 years of dedicated service in aviation safety by the FAA.

Joe was a member of St. Mary’s Our Lady Help of Christians Church,  Dorrance Township. He was also a member of the Mountain Top Knights of Columbus, the Quiet Birds Organization of Pilots and he served as President of the Wyoming Valley Flying Club. Joe also enjoyed planting in his garden, baking, dancing, singing.

Joe was preceded in death by his wife, Doris Rupp Baratta, in 2009, and by his son, Gerald Baratta.

Family and friends may call on Tuesday from 2 – 4 pm at the Nat & Gawlas Funeral Home, 89 Park Avenue, Wilkes-Barre.

A Mass of Christian Burial will be held on Wednesday at 10 am in St. Mary’s Our Lady Help of Christians Church, 3529 St. Mary’s Road, Dorrance Township.  Those attending the Mass are asked to go directly to the Church.  Due to the COVID 19 Virus there is maximum capacity of 50 people in Church.  Interment will be in Calvary Cemetery, Drums.

Those attending the visitation and Mass are required to wear a mask and abide by state social distancing requirements.

Condolences may be sent by visiting Joe’s obituary at www.natandgawlas.com.