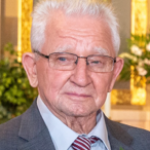 It is with heavy hearts and great sorrow that the family of Joseph Adam Prednis, Jr. announces that he passed away peacefully on September 27, 2020, under the care of the V.A. Hospice of Community Living Center, Plains Township.

Joseph was born on August 22, 1935, a son of the late Joseph and Beatrice Prednis.

Joseph was a lifelong resident of Wilkes-Barre. He was a very hard-working truck driver and was employed by the Wilkes-Barre Area School District. He was an avid Dale Earnhardt and NASCAR fan. In his spare time, Joe loved going out on the many rivers and lakes to go fishing with family and friends. He was a proud Air Force veteran, earning the National Defense Service Medal, Good Conduct Medal and Air Force Outstanding Unit Award while serving our country in the Korean War. Joe held the distinct honor of being a past president of the North End Slovak Citizens Club, a social member of the Polish American Veterans and a lifelong member of the American Legion.

He was preceded in death by his beloved wife, Joan. Also preceding him in death were his previous wives Catherine and Maryann; brothers, Allan Savage and Ronald Savage; and sisters Gloria Chapasko and Carol Makaravage.

Family and friends may call from 4-7 P.M. on Friday October 2, 2020 at the Nat & Gawlas Funeral Home, 89 Park Avenue, Wilkes-Barre. Joe’s funeral service will be held at 7 P.M. following the public calling hours. The Reverend Carol E. Coleman will officiate.

Those attending the service must wear a mask and abide by the State and CDC social distancing guidelines.

Condolences can be sent by visiting Joseph’s obituary at www.natandgawlas.com.