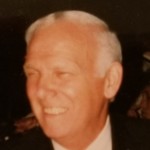 Joe was born in Wilkes-Barre, a son of the late Michael and Anna Pehala Boyarski. He was a US Army veteran, serving during the Korean War. While serving in Germany, he met the love of his life, Marianne Grabe. Joe and Marianne celebrated 60 years of marriage on September 10, 2012, before her passing.

Joe was formerly employed by the RCA Corporation and the Frankford Arsenal in Philadelphia and he retired from the U.S. Postal Service in the Philadelphia area, after 25 years of service.

Joe was a member of American Legion Post # 0821 in Philadelphia for 62 years. He also participated in the Bucks County “Tour of Honor” in 2017.

He was an avid gardener who loved beautifying his property and home with seasonal flowers.

Joe was a devoted “Pop Pop” to Alexa, daughter of Michelle and Tom Rychwalski.

In addition to his wife, Marianne, he was preceded in death by his sisters, Mary Pagarelski, Stella Jablonski and Josephine Bandini; and brother, John Boyarski.

Interment with military honors will be held on Friday, January 24, 2020, at 11 AM in Washington Crossing National Cemetery, 830 Highland Road, Newtown. Rev. Peter Gregory will officiate.

In lieu of flowers, memorial donations may be made in Joe’s memory to a veteran’s organization of the donor’s choice.

Online condolences may be sent by visiting Joe’s obituary at www.natandgawlas.com.