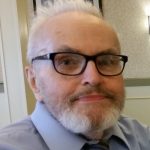 Joseph P. Laub Sr., 95, formerly of Wilkes-Barre, passed away on Thursday at Tiffany Court in Kingston.

He was born in Minooka, a son of the late Emil and Ruth Erronomus Laub.  Joseph was a graduate of Scranton Tech High School.  Prior to his retirement, he was employed as a Senior Vice President by United Penn Bank.

Joseph was a member of St. Nicholas Church in Wilkes-Barre.  He was also a member of the Knights of Columbus and the Alhambra Caravan.  Joseph served as treasurer of the Oakwood Park Townhouse Association.  He volunteered his time and talents with the Retired Senior Volunteer Program at the Osterhout Library and at the Kingston Senior Center, teaching computer skills to senior citizens.  He also served on the St. Mary’s Church of the Immaculate Conception Church Finance Council and as a Eucharistic Minister at the former St. Boniface Church in Wilkes-Barre.

He was preceded in death by his wife, Louise Matich Laub in 2001 and by his brother, James Laub.

Funeral Services will be held on Wednesday at 9:30 am from the Nat & Gawlas Funeral Home, 89 Park Avenue, Wilkes-Barre, with a Mass of Christian Burial to follow at 10 am in St. Nicholas Church, 226 S. Washington Street, Wilkes-Barre.  Entombment will be in St. Mary’s Cemetery, Hanover Township.

Friends may call at the funeral home on Tuesday from 5 – 8 pm.

Those attending the visitation and funeral mass are required to wear a mask and abide by the CDC and State social distancing requirements.

In lieu of flowers, donations may be made in Joseph’s name to St. Nicholas Church, 226 S. Washington Street, Wilkes-Barre, PA  18701.

Condolences may be sent by visiting Joseph’s obituary at www.natandgawlas.com.