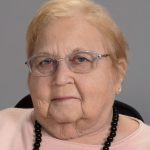 Joyce Anne (Gainer) Grimm, 79, of Mountain Top passed away on Saturday December 5, 2020. She lived in York County, PA for over 35 years before moving to Mountain Top, PA. She had been married to the late Jesse H. Grimm for 55 years, who passed away in 2016.

Born February 28, 1941 in Belington, WV, she was the daughter of the late Rev. Mendell L. and Irma J. (Harbert) Gainer. As the daughter of a United Methodist pastor, she moved several times throughout her childhood, before moving to Clarksburg, WV, where she met Jesse Grimm. He delivered the newspaper and liked her short shorts. The two of them were married on October 15, 1960.

Joyce graduated from Victory High School in Clarksburg. She, subsequently, graduated from Millersville State University with a Bachelors’ Degree in Education. She was a Special Education Teacher who worked for Lincoln Intermediate Unit #12 and then for Northeastern School District. She loved her work and many of her students kept in contact with her long after they graduated.

She is survived by daughter Marcy Picardi and husband Joe of Pittsburgh, and son-in-law JP Bohanan of Mountain Top. Her daughter Robin Bohanan died in May of this year. Joyce is also survived by four grandchildren, Jesse Bohanan, Anthony Picardi, Caleb Bohanan and wife Stephanie, and Anne Picardi, and also by her brothers, Richard Gainer and Mark Gainer. Joyce loved her family dearly, including her nieces and nephews. She expanded her family further by her gift of friendship.

Joyce was guided by her faith. She was an active member of St. Paul United Methodist Church in Manchester, PA, singing in the choir, working with Sunday School, and volunteering with the Food Pantry. Joyce was a purchaser for Bon-Ton department stores and an advocate for persons with special needs. She loved the beach, giraffes, Jeopardy, and the Baltimore Ravens.

Friends and family are invited to an outdoor “window” visitation on Monday, December 14th from 9:30 – 10:15 at Christ United Methodist Church, 175 South Main Road, Mountain Top. The funeral service will be private and livestreamed from christonthemountaintop.org. Burial will be at Indiantown Gap National Military Cemetery. Pastors Larry Leland and JP Bohanan are presiding.

Condolences may be sent by visiting Joyce’s obituary at www.natandgawlas.com.