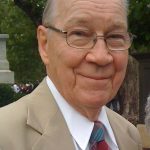 Leroy attended G.A.R. Memorial High School in Wilkes-Barre. He left school to proudly serve in the U.S. Navy. After his honorable discharge, he returned to school to graduate in 1948. In 1950, he was drafted into the U.S. Army to serve in the Korean War before returning home to Wilkes-Barre. In 1951, he married his beautiful wife Charlotte. Mr. Edwards was employed at Woodlawn Dairy and Dolly Madison Ice Cream before accepting a position in Mercy Hospital’s Engineering department, where he worked until his retirement in 1993.

Leroy and Charlotte were happily married until her death in February of 2020 and they were inseparable. They built a home filled with love and laughter and you could often find them sitting on their front porch with a cup of tea or a glass of wine, just enjoying their time together. Having spent 68 years of Christmases together, Leroy’s death on Christmas Eve means they never have to spend a Christmas apart.

Leroy exemplified loyalty, honesty and integrity. His favorite advice was “Do the right thing,” which is a principle by which he led his life. Left to cherish his memory are his sister Shirley Meeker, and his four children – Cheryl Holovach and her husband Jim of Williamsburg, VA; Craig Edwards and his wife Sharon of Swoyersville, PA; Caron Edwards of Kingston, PA; and Cathy Kieserman of Olney, MD. He was a loving grandfather to 8 grandchildren – Jim Holovach (and wife Crystal), Kelly Roberts, Cory Holovach and Carrie Holovach, Hunter Kieserman, Noah Kieserman, Caitlin Edwards and Callie Edwards.  He was also a devoted great-grandfather to 5 great-grandchildren – Darren, Brianna, Caden, Austen Roberts and Michael McQuillen. Leroy was always happiest when he was surrounded by his family and he was the loving patriarch of that family.

Due to COVID-19 restrictions, a private family funeral will be held at Nat & Gawlas Funeral Home, 89 Park Avenue, Wilkes-Barre. Interment will follow in St. Mary’s Cemetery, Hanover Township.  A public celebration of Leroy’s life will be scheduled for a later date.

Condolences may be sent by visiting Leroy’s obituary at www.natandgawlas.com.