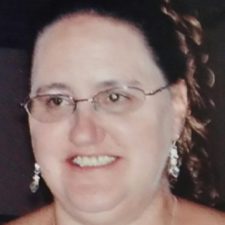 She was born in Salina, Kansas, a daughter of the late Olga Nat Robert.  Lisa was formerly employed at McCrory’s Department Store and as a pharmacy technician at Faye’s Drugstore.

Lisa was a talented crocheter and she loved arts and crafts.  She and her husband loved to share her talents and crafts as Terry & Lisa’s Crafts at local craft shows.

Most of all Lisa was a loving and devoted wife, mother, grandmother, sister and aunt.   She will be sadly missed by all who knew her.

Lisa is survived by her husband, Terry L. Wildoner, with whom she celebrated their 39th Wedding Anniversary on November 8th.  She is also survived by her son, Anthony Robert and his wife, Jennifer, Mount Carmel and by her daughter, Lisa Marie Wildoner and her companion, Mark Marcella, Plymouth; grandchildren, Lauren, Jack, Jessa, Sam and HaleyLyn; sister, Recijo Mulder and her husband, Robert, Oakland, NJ; brother, Theodore Robert and his wife, Joanne, Jenkins Township; nephews, Joseph and Christopher Robert and Alexander Mulder; and by numerous cousins.

Funeral Services will be held on Saturday morning at 10 am from the Nat & Gawlas Funeral Home, 89 Park Avenue, Wilkes-Barre.  Deacon William Behm will officiate. Interment will be private and at the convenience of the family.

Friends may call on Friday from 5 – 8 pm at the funeral home.

In lieu of flowers, memorial donations may be made to the Crohn’s and Colitis  Foundation, 150 Monument Road, Suite 402, Bala Cynwyd, PA  19004.

Online condolences may be sent by visiting Lisa’s obituary at www.natandgawlas.com.