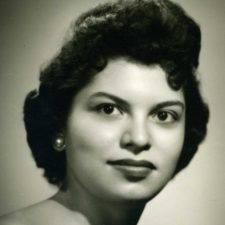 Lucille was born in Wilkes-Barre, the only child of the late Charles and Angelina Fantozzi Stillarty.  Lucille attended the S.J. Strauss elementary school and E.L. Meyers High School, class of 1952. Upon graduation, she began work at the Miners National Bank in the check reconciliation department.  Lucille was always a very outgoing and friendly person and made lifelong friends in all of these parts of her early life.

In 1963, she and her late husband, Robert J. Bertram Sr., founded the Robert J Bertram Insurance Agency.  While raising four children at the same time, she was an integral part of the new business, proving herself a valuable part in its early success.

She and her husband were both involved in the St Therese’s Little League in the 1960’s and 1970’s, again, making family friendships that lasted until her death.

Family was an integral part of Lucille’s life as she was the matriarch of her family.  Both she and her husband were the only children to their parents and as such, their desire was to always have a large family. They accomplished this by having 5 children, 12 grandchildren and 12 great grandchildren.

The biggest joys in her life always involved her family. Lucille was an amazing cook and nothing made her happier than cooking for her entire family and friends on all the holidays.  With such a large family, this usually meant no fewer than 24 guests and she always made sure to have enough to send everyone home with leftovers.  She always looked forward to the annual family vacations on Long Beach Island as well as annual trips with her daughters to Cape May.

Lucille was a member of St. Nicholas Church, Wilkes-Barre and was most recently a member of its prayer shawl ministry.

Lucille was preceded in death by her beloved husband Robert J. Bertram Sr., in 1994, and their son, Robert J Bertram Jr. in 2008 and grandson Joseph F Rudaski in 2018.

Funeral service will be held on Thursday at 9:30 am from the Nat & Gawlas Funeral Home, 89 Park Avenue, Wilkes-Barre, a Mass of Christian burial will follow at 10 am in St. Nicholas Church, 226 S. Washington Street, Wilkes-Barre.  Interment will be in St. Mary’s Cemetery, Hanover Township.

Friends may call on Wednesday from 4-8 pm at funeral home.

Memorial donations can be made to the Sidney Kimmel Cancer Center at Thomas Jefferson Hospital, 233 S. 10th Street, Philadelphia, PA  19107.

Condolences may be made by visiting Lucille’s obituary at www.natandgawlas.com