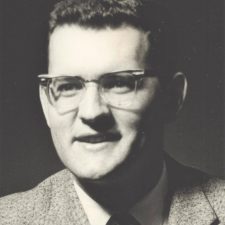 Lou was a lifelong resident of Wilkes-Barre and a U.S. Army veteran of the Korean War.

After returning from military service, he graduated from King’s College and began a career in journalism.

While working at the Catholic Light newspaper in Scranton, he met co-worker, Marion Gower, who became his wife of 55 years.

He also worked at the Sunday Independent newspaper in Wilkes-Barre, serving as managing editor for many years.  In addition to being and avid sports fan, Lou read extensively while following politics and current events.

Lou had a deep appreciation of the wonders of nature, the changing seasons, and the great outdoors.

In addition to his parents, Ludwig and Theresa Rauscher, he was preceded in death by his wife, Marion, in 2018.

He is survived by his sons, Lou and Scott Rauscher.  He is also survived by his brother, Joseph Rauscher of New Tripoli; sister, Marion Bieble of Wilkes-Barre; numerous nieces and nephews; and several cousins.

Condolences may be sent by visiting Ludwig’s obituary at www.natandgawlas.com.