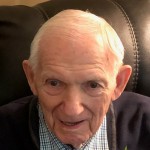 He was born in Wilkes-Barre, a son of Ludwig and Maria Lichtenauer Steininger. Lou was a graduate of St. Nicholas High School. He was an army veteran serving during the Korean War.

Lou’s family would like to thank the entire staff at St. Therese Residence and Little Flower Manor (Allied Services Meade Street Skilled Nursing) for the loving and devoted care that they provided.

Funeral services will be held on Tuesday at 10:30 AM from the Nat & Gawlas Funeral Home, 89 Park Avenue, Wilkes-Barre, with a Mass of Christian Burial to follow at 11 AM in St. Andrew Parish, 316 Parrish Street, Wilkes-Barre. Interment will be in St. Mary’s Cemetery, Hanover Township.

Online condolences may be sent by visiting Lou’s obituary at www.natandgawlas.com.