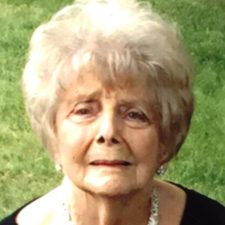 Margaret B. Pastula, 90, formerly of Wilkes-Barre, passed away on Monday at the Meadows Nursing and Rehabilitation Center, Dallas.

She was born in Wilkes-Barre, the oldest daughter of the late Lewis John and Lillian Jervis Bebb.  Margaret was raised in Sugar Notch.  She was a graduate of Sugar Notch High School and the Wilkes-Barre Business College.

Prior to her retirement, she had been employed by Pennsylvania Millers Mutual Insurance Company.

Margaret was a member of St. Stephen’s Episcopal Pro-Cathedral in Wilkes-Barre, where she was active in the Women’s Group.  She was also a member of T.O.P.S. and Weight Watchers. Margaret was an avid reader, who loved a good book.

Margaret was a loving and devoted wife, mother, grandmother and great grandmother, who will be sadly missed by her family and friends.

Funeral Services will be held on Friday at 11 am in St. Stephen’s Episcopal Pro-Cathedral, 35 S. Franklin Street, Wilkes-Barre.  Rev. Timothy Alleman and Rev. Joseph Rafferty will officiate.  Those who are attending the service are asked to go directly to the Church on Friday.  Interment will be in Maple Hill Cemetery, Hanover Township.

Family and friends may call on Thursday from 5 – 8 pm at the Nat & Gawlas Funeral Home, 89 Park Avenue, Wilkes-Barre.