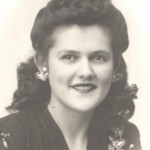 Margaret Kish, 96, of Wilkes-Barre Township, passed away on Saturday in Allied Services Meade Street Skilled Nursing, Wilkes-Barre.  She had lived in the family home, along with her nephew & niece, Andrew and Emily Turriziani.

She was born in Wilkes-Barre Township, a daughter of the late Michael Sr. and Mary Hresko Kish.  Margaret was a graduate of Wilkes-Barre Township High School.  She was employed in the restaurant business for 35 years, working in Rooney’s Restaurant, the Hotel Redington and the Sterling Hotel. In her later years, she worked at S.S. Kresge’s, retiring in 1982, upon its closing.

Margaret was a devoted member of St. John the Baptist Byzantine Catholic Church in Wilkes-Barre.

She was preceded in death by her brothers, Daniel, Michael and John Kish and by her sister, Helen Klos.

Margaret is survived by her brother, Joseph Kish and his wife, Wilma, Mint Hill, NC; and by her sisters, Anna Mickulik, Wilkes-Barre Township, Mary Kula and her husband, John, Union Springs, NY and Elizabeth Scavone, Hanover Township; and by numerous nieces and nephews.

Private funeral services will be held at the convenience of the family, with the Office of Christian Burial to be celebrated in St. John the Baptist Byzantine Catholic Church, 526 Church St., Wilkes-Barre Township.  Interment will be in St. Mary’s Byzantine Catholic Cemetery, Dallas.