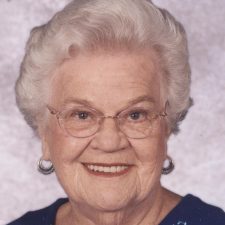 Peggy was born April 16, 1920 in Wilkes-Barre, a daughter of the late Frank and Genevieve Smith Jacobs. She was a graduate of G.A.R. High School, Class of 1938, and she was also a graduate of the Wilkes-Barre Business College. Peggy worked at the family business, Panzarello Refrigeration, for many years as a bookkeeper. She later worked in the parish office at the rectory of St. Nicholas Church in Wilkes-Barre.

Known for her smile and kind heart, Peggy’s grandchildren often referred to her as “The Mayor of Wilkes-Barre,” for it was hard to walk a block without someone stopping to say hello.

Peggy was a lifelong member of St. Nicholas Church and its choir. She loved to sing and often impressed other residents of her nursing home with both her voice and memory for song lyrics. Peggy enjoyed knitting, traveling, and playing Bingo and loved spending time with her family. She was also a member of the Madame Curie Society.

She was preceded in death by her husband Frank Panzarello in 1964; daughter, Jean Ann Panzarello in 1949; sisters Jeanette Jacobs, Marian Jacobs, Genevieve Simpson, Eleanor Seymour, and Kathryn McNulty; and by her brothers, Frank and Eugene Jacobs.

Private funeral services will be held at the convenience of the family. There will be no calling hours. Interment will be in St. Mary’s Cemetery in Hanover Township.

A public celebration of Peggy’s life and a memorial mass will be held at a future date.

Online condolences can be sent by visiting Peggy’s obituary at www.natandgawlas.com.