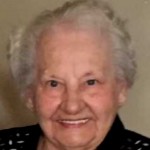 Margaret Wasil, 94, a resident at Wesley Village, formerly of Wilkes-Barre, passed away on Wednesday in Residential Hospice at Geisinger South Wilkes-Barre.

She was born in Wilkes-Barre, a daughter of the late Martin and Anna Mahala Nat.  Prior to her retirement, she had been employed for many years at the Mary Macintosh Laundry in Wilkes-Barre.

Margaret is survived by her son-in-law, Lawrence Lynch and by her grandson, Christopher Lynch and his wife, Debbie; great grandchildren, Christopher John Lynch and Kylie Morgan Lynch; several nieces, nephews and cousins.

Funeral Services will be held on Friday evening at 6 pm from the Nat & Gawlas Funeral Home, 89 Park Avenue, Wilkes-Barre.  Rev. John S. Terry, Pastor of Our Lady of Hope Parish will officiate.

Private interment will be held at the convenience of the family in St. Mary’s Cemetery, Hanover Township.

Family and friends may call on Friday from 4 – 6 pm at the funeral home.

In lieu of flowers, memorial donations may be made to Residential Hospice or to the charity of the donor’s choice.