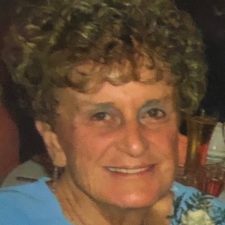 Marguerite (Peggy) Jones, 81, of Wilkes-Barre, passed away on Thursday, June 27, 2019 at her home surrounded by her loving family.

Peggy was born in Wilkes-Barre Township, a daughter of the late Harry and Helen Quinn Evans. She was a graduate of Wilkes-Barre Township High School. Peggy was employed as a secretary at St. Joseph’s Monastery in Wilkes-Barre Township for 36 years. She was a devout Catholic and was a former member of St. Joseph’s Monastery, where she served as treasurer of the Altar and Rosary Society and as a Eucharistic Minister. She was awarded the Francis Medal by the Franciscan Fathers Holy Name Providence for her uncommon contributions to the advancement of the values and ideals of St. Francis of Assisi. Upon the closing of St. Joseph’s Monastery, she became a member of Holy Trinity Church and later, Our Lady of Hope Parish, serving as a Eucharistic Minister at both churches and she was a member of the Christian Women’s Association.

Peggy also served as a volunteer at John Heinz Institute and was a member of the Irem Shrine Women’s Auxiliary. She was a former member of the Order of St. John Neuman Division of the Ladies Ancient Order of Hibernians.

Family meant everything to Peggy. She lived for her family, especially as a Nana and Great Nana.

Peggy was preceded in death by her brothers, John, Harry, and James Evans.

A Mass of Christian Burial will be held on Wednesday at 11 AM in Our Lady of Hope Parish, 40 Park Avenue, Wilkes-Barre. Family and friends may call at the church on Wednesday from 9:30 – 11 AM. Parking is available in the church parking lots on South Hancock St. off of East Northampton Street.

Online condolences may be sent by visiting Peggy’s obituary at www.natandgawlas.com.