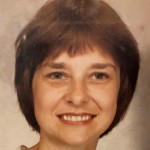 She was born in Philadelphia, a daughter of the late William and Mildred Ward.

She was preceded in death by her sister, Dorothy Sayers

Private funeral services were held at the convenience of the family.