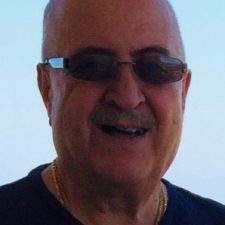 Maroun T. Maroun, 79, of Wilkes-Barre, passed away on Monday, April 22, 2019, in the Inpatient Unit of Hospice of the Sacred Heart in Dunmore.

He was born in Beirut, Lebanon, a son of the late Tanios and Mariam Michael Maroun.  Maroun was employed as a manager and maitre d’ at several local restaurants, including the Saber Room and Kazimis.  He also owned the Phinicia Restaurant in Hanover Township.  Maroun also worked for the Luzerne County Veterans Affairs Office and as a security guard at the Luzerne County Courthouse.

Maroun was a member of St. Anthony-St. George Maronite Catholic Parish in Wilkes-Barre. He was also a member of the Knights of Lebanon.

In addition to his parents, he was preceded in death by a brother, Joseph Maroun.

Divine Liturgy will be held on Thursday at 11 am in St. Anthony’s Maronite Catholic Church, 311 Park Avenue, Wilkes-Barre.  His Pastor, Rev. Paul Damien, will officiate.  Interment will be in St. Mary’s Cemetery, Hanover Township.

Family and friends may call on Thursday from 10 – 11 am at the Church.

Online condolences may be sent by visiting Maroun’s obituary at www.natandgawlas.com.