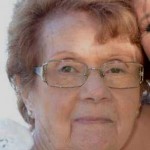 She was born in Wilkes-Barre, a daughter of the late Moses T. and Mary Sipple Luton.  Mary Lou attended Wilkes-Barre Area Schools.  She was formerly employed by the RCA Corp. in Mountain Top and she retired from Lord & Taylor in Wilkes-Barre Township.

Mary Lou was a member of St. Elizabeth’s Church in Bear Creek.

A Mass of Christian Burial will be held on Thursday at 10 am in St. Elizabeth’s Church 5700 Bear Creek Blvd. (Rte. 115), Bear Creek.  Family and friends attending the Mass are asked to go directly to the Church.  Interment will be in Blakeslee Cemetery, Blakeslee.

Friends may call on Wednesday from 5 -7 pm at the Nat & Gawlas Funeral Home, 89 Park Avenue, Wilkes-Barre.

Online condolences may be sent by visiting Mary Lou’s obituary at www.natandgawlas.com.