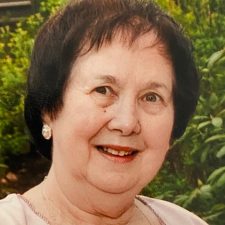 Maureen A. Jones Yastremski, 79, of Wilkes-Barre passed away April 7, 2022, with her daughter by her side. Born in Wilkes-Barre on March 17, 1943, she was the daughter of the late William and Doris Myers Jones.

Maureen graduated from St. Leo’s High School and attended Wilkes-Barre Business College. After meeting her beloved husband, the late Robert Yastremski, at an Easter Monday dance in 1965, Maureen and “Bob” married in 1967 to begin their lives together and start their family.

Left to treasure her memory are her three children; son Robert and his wife, Lenore, Danbury, CT; son David and wife Tatiana, Mendham NJ; and daughter Kathryn Altavilla and husband, Mark; Wilkes-Barre, along with seven grandchildren, Robert, Nora, Matthew, Stephen, Thomas, and John Yastremski of Danbury, CT and Mark Altavilla of Wilkes-Barre; and brothers, Robert and Debra Jones, Bethlehem, PA; and William and Shirley Jones, Belleville, MI. The family would like to thank Connie Corby and Griswold Home Care services for their invaluable care of Maureen and Bob for the past two years.

Over her career in financial services, she worked for the Social Security Administration, United Penn Bank, Citizens Bank, and after fifteen years with Sallie Mae, Maureen retired to enjoy many trips to Ocean City, MD with her family. Maureen loved dancing with Bob, baking for her family, watching QVC, gardening in the back yard and taking care of her pets. She was an active member of the Hanover Twp. Junior Woman’s Club for many years

A wonderful mother, grandmother, sister, and friend, Maureen will be greatly missed by all who knew and loved her. The family finds great comfort in knowing she is at rest and reunited with her husband, parents, and infant siblings Girard and Sharon Jones, in eternal peace. She was a member of St. Nicholas parish in Wilkes-Barre.

Maureen’s family will celebrate her life beginning with a visitation from 4:00 to 7:00 p.m. at St. Nicholas Church, 226 S. Washington Street, Wilkes-Barre, on Tuesday, April 12th and from 10 a.m. to service time Wednesday in the church. A Mass of Christian Burial will be held at 11:00 a.m. on Wednesday, April 13th. The Rite of Committal and burial will follow in St. Mary’s Cemetery, Hanover Twp.

Condolences may be sent by visiting Maureen’s obituary at www.natandgawlas.com.