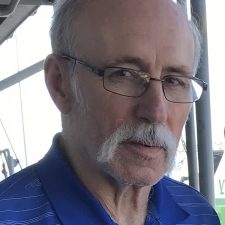 Michael J. Conway Sr., 73, of Dallas passed away on Friday, October 14, 2022 at the Meadows Nursing & Rehabilitation Center in Dallas, surrounded by his loving family, after a courageous battle with Parkinson’s disease, due to his exposure to agent orange during his service in Vietnam.

He was born in Wilkes-Barre, and raised in Ashley, a son of the late Martin L Conway and Amelia Kratz Conway.  Mike was a graduate of St. Leo’s High School in Ashley and Wilkes College.  He proudly served with the U.S. Navy, aboard the USS Comstock.

Mike was formerly employed as a property manager for PNC Bank. He was also a project manager at Quad 3 Group, the owner of MCS Construction and he was a member of the Laborer’s Union, Local 130.

Mike’s family would like to extend a special thank you to his home aide, Juliet, the staff of Hospice of the Sacred Heart, the staff of the Meadows Nursing & Rehabilitation Center, the staff at the VA Hospital and Dr. Shamsedeen.

Mike is survived by his loving wife of 52 years, L. Nora Sager Conway and by his sons, Michael Conway Jr. and his wife, Lori, Forty Fort and Matthew Conway and his wife, Meghan, Sharon, MA; grandchildren, Michael III, Colin, Owen, Liam and Ryan Conway.  He is also survived by a sister, Virginia Grilz, Wilkes-Barre; brother, Martin Conway, Shavertown; and by numerous nieces and nephews.

Funeral services will be held on Tuesday at 9:30 am from the Nat & Gawlas Funeral Home, 89 Park Avenue, Wilkes-Barre, with a Mass of Christian Burial to follow at 10 am in St. Nicholas Church, 226 S. Washington Street, Wilkes-Barre.  Interment with Military Honor’s will be in Maple Hill Cemetery, Hanover Township.

Friends may call from 4 – 7 pm on Monday at the funeral home.

In lieu of flowers, donations may be made in Mike’s memory to Hospice of the Sacred Heart,

Condolences may be sent by visiting Mike’s obituary at www.natandgawlas.com.