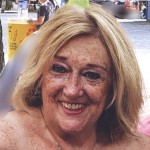 She was born in Wilkes-Barre, the daughter of the late William and Mildred Basso Millham. She was a graduate of Coughlin High School, class of 1968. Milly was formerly employed by King’s College as an administrative assistant.

Anyone who knew her, knew that Milly was most proud of her four children and two grandchildren. Whether it was a holiday, birthday or just another day at Gammy’s, Milly always had a surprise waiting for her best buddy, Kevin Jr., or her love bug, Avery. She enjoyed swimming, shopping, traveling and spending every minute she could with Kevin Jr. and Avery. Her two grandchildren were the loves of her life, the apples of her eyes and the reason she fought through so many tough times. She truly loved the title of Gammy more than any other.

Milly had a beautiful smile, a contagious laugh, and a heart of gold. She never hesitated to put others first. She was an incredible wife, mother, friend and Gammy, and the hole left in our hearts will forever be there. Milly was taken from us way too soon and way too quickly.

Friends may call on Wednesday from 5-7 P.M. at the funeral home.

In lieu of flowers donations can be made to the charity of the donor’s choice.

Online condolences may be sent by visiting Milly’s obituary at www.natandgawlas.com.