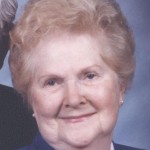 Amid the loving presence of her immediate family, Miriam Irene Kaiser Simmers passed away into eternal rest on Sunday, February 16, 2020.  Born in Wilkes-Barre on June 9, 1925, she was the daughter of the late Simon Joseph Kaiser and Irene Estelle Hoskins Kaiser.

Miriam graduated from G. A. R. memorial High School in 1943.  During her sophomore year, she accepted a part-time position as a clerk in the piece goods department of Neisner Brothers Five and Ten Cent Store.  She later became manager of the department.  When the Wilkes-Barre store closed, she and several fellow employees were transferred to the Scranton Store, traveling by Laurel Line every day until that store closed.  She then took a volunteer position as office manager and bookkeeper with the Wyoming Valley Council of Churches, serving that organization for over twenty-five years.

In addition to her parents, Miriam was predeceased by her son, Wesley B. Simmers, Jr., brothers Charles H. Kaiser, Richard M. Kaiser and Frank Kaiser.

Funeral arrangements are under the care of Nat & Gawlas Funeral Home, 89 Park Avenue, Wilkes-Barre.  At Miriam’s request there will be no viewing.  A memorial service will be held at the First Presbyterian Church, 97 S. Franklin Street, Wilkes-Barre on Sunday, February 23, 2020 at 3:00 p.m.  The family will receive those wishing to offer condolences at 2:00 p.m. prior to the service.  Interment will be in Oak Lawn Cemetery, Hanover Township.

The family would also like to offer its heartfelt gratitude to the nurses, aides and social worker of Residential In-Home Hospice for their compassionate care of Miriam during her final days.

Memorial donations may me made to the First Presbyterian Church or Residential Hospice Foundation, 5440 Corporate Drive, Suite 400, Troy, MI, 48098.

Online condolences may be sent by visiting Miriam’s obituary at www.natandgawlas.com.