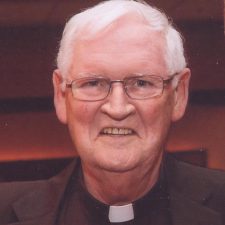 Monsignor Rauscher, son of the late Frederick Rauscher and Bertha (Kaufmann) Rauscher, was born in Wilkes-Barre on June 11, 1941. He received his early education at St. Boniface School and graduated from St. Nicholas High School, Wilkes Barre.  Monsignor attended King’s College, Wilkes Barre.  He entered Mount St. Mary’s Seminary, Emmitsburg, Maryland where he completed his studies for the priesthood and earned a Bachelor of Arts in Philosophy.  Monsignor was ordained to the priesthood on May 27, 1967 by the Most Reverend J Carroll McCormick, Bishop Emeritus of the Diocese of Scranton.

Monsignor Rauscher served as assistant pastor pro tem at St. Patrick’s, Milford from June 1967 until his appointment to continuing education at Catholic University, Washington, DC in September 1967 where he earned a Licentiate of Sacred Theology.  Upon his return to the Diocese, he was appointed Assistant Pastor at St. Aloysius, Wilkes Barre in June 1969 and Assistant Pastor at St. Nicholas, Wilkes Barre in September 1970.  In September 1973, Monsignor was appointed to live in residence at College Misericordia, Dallas and in November of 1973 was appointed to serve as Assistant Pastor at St. Cecilia, Exeter.  Monsignor continued his education at Mount St Mary’s, Emmitsburg, Maryland earning a Masters Degree in Theology in May 1974.  He was next appointed to live in residence at Emmanuel Hall, Marywood University in August 1978.

Monsignor received his first pastorate in February 1984 at Corpus Christi , Montdale where he served until June of 1988 when he took a Sabbatical to attend The Center for Continuing Formation in Ministry at the University of Notre Dame.

Monsignor Rauscher was appointed pastor at St. Nicholas, Wilkes Barre in September 1989, a position that he held for twenty-seven years until his retirement and appointment as Pastor Emeritus in July 2016.

Monsignor was made a Chaplain to His Holiness in March 1983 and a Prelate of Honor in July 1990.

Monsignor Rauscher was a recipient of the Wyoming Valley Interfaith Council’s annual “Citation of Distinction” award in November 2011.  The Most Rev. Joseph C. Bambera, Bishop of Scranton, gave the invocation at the ceremony to honor Monsignor Rauscher.

Monsignor Rauscher was also a recipient of the “John Cardinal McCloskey Award” in 2017.  The award is presented annually by the National Alumni Association at the Seminary Alumni Dinner to a Mountaineer priest for outstanding service to the mission of the church.

Monsignor was a member of the Wilkes-Barre Downtown Ministerium.  He also served on the boards of GRIT INC, Catholic Social Services and the St. Vincent de Paul Kitchen.

Monsignor was one of the founders of the ‘Living a New Life’ support group for the widowed. He helped found the Scranton chapter of the “Beginning Experience,” a weekend program for separated, divorced and widowed individuals and also was moderator for several monthly support groups for the separated and divorced in the Diocese.  He was also involved with the formation of “Faith Speaking with One Voice” a congregation-centered community organization formed by the clergy leaders of congregations in the Wilkes-Barre region.

Monsignor Rauscher celebrated the 50th Anniversary of his Ordination with a Pontifical Mass celebrated by Most Reverend Joseph C. Bambera, D.D., J.C.L. on June 22, 2017.

Monsignor was a member of the Knights of Columbus, Council 302, Wilkes-Barre.

A Pontifical Mass of Christian Burial will be celebrated by the Most Reverend Joseph C. Bambera, D.D., J.C.L., Bishop of Scranton, on Thursday, November 21, 2019 at 10:00 a.m. in St. Nicholas Church.  Interment will be in St. Mary’s Cemetery, Hanover Township.

In lieu of flowers, donations may be made in Monsignor’s memory to the St. Nicholas Church Building Fund, 226 S. Washington Street, Wilkes-Barre, PA 18701.

Online condolences may be sent by visiting Monsignor’s obituary at www.natandgawlas.com