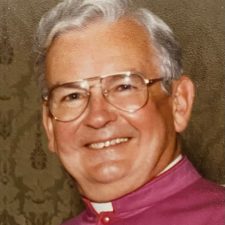 Monsignor Kulik, son of the late Frank and Jennie (Pesta) Kulik, was born in Avoca on April 1, 1929.  He received his early education in the Avoca public school system.  Monsignor Kulik graduated from St. Mary’s College, Michigan, having received his Bachelor of Arts degree in June of 1950.  He continued his studies for the priesthood at SS Cyril and Methodius Seminary and was ordained to the priesthood on June 5, 1954 by the Most Reverend Henry T. Klonowski, late auxiliary Bishop of Scranton.

Monsignor Kulik was assigned as assistant pastor at St. Ann’s, Tobyhanna; Transfiguration, West Hazleton; and Nativity of the Blessed Virgin Mary, Plymouth.  He served as Professor at St. Pius X Seminary, Dalton and Director of Camp St. Andrew and was then assigned as assistant pastor at Visitation of the Blessed Virgin Mary, Dickson City and served in this capacity until his appointment as administrator of Corpus Christi, Montdale in 1971.

Monsignor Kulik received his first pastorate at Corpus Christi, Montdale in 1972 where he served for five years.   In 1977, Monsignor was appointed administrator of Maternity of the Blessed Virgin Mary, Wilkes Barre and then Pastor in 1983.  He served in this assignment for over 21 years until his retirement and appointment as Pastor Emeritus in 2004.

He was elevated to Chaplain of His Holiness and named a Monsignor on November 2, 1978, and Prelate of Honor by Pope Saint John Paul II on July 10, 1990.

In addition to his parochial duties, Monsignor also served as Chaplain of the Blakely Convalescent Home and Dean of the North Wilkes Barre Deanery.

Monsignor Kulik celebrated the 60th Anniversary of his Ordination with a Pontifical Mass Celebrated by Most Reverend Joseph C. Bambera, D.D., J.C.L. in 2014.

Monsignor is survived by a sister, Shirley Polaski, Clinton, NJ and several nieces and nephews, as well as the family of the late Stanley Stachacz.

Monsignor was preceded in death by his brothers, Rev. Francis J. Kulik and Daniel Kulick, and his brother-in-law, Joseph J. Polaski.

A Pontifical Mass of Christian Burial will be celebrated by the Most Reverend Joseph C. Bambera, D.D., J.C.L., Bishop of Scranton, on Monday, January 10, 2022, at 11:00 a.m. at St. Mary Maternity Church, Our Lady of Hope Parish, Wilkes Barre.

Private interment will be in Sacred Heart Cemetery, Dupont.

In lieu of flowers, memorial donations may be made to the St. Vincent DePaul Kitchen, 39 East Jackson Street, Wilkes-Barre, PA  18701.

Condolences may be sent by visiting Monsignor’s obituary at www.natandgawlas.com.