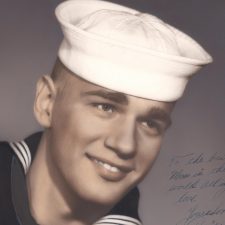 Oscar was a four year U.S. Navy veteran, who honorably served our country during the Korean War. Throughout his time of service he was awarded the Korean Service Medal, the United Nations Service Medal and the National Defense Service Ribbons, while serving aboard the aircraft carrier, USS Yorktown CVA 10. Upon his honorable discharge on May 11, 1956, Oscar attained the rank of Aviation Electrician Third Class Petty Officer A-E3.

Prior to his retirement, Oscar was employed by ACME Markets for 45 years.  He worked various positions, starting as a meat apprentice out of high school and retiring as an Executive Meat Purchaser for the region north division.

A devout Catholic, Oscar was a faithful member of St. Nicholas Roman Catholic Church, where he was a member of the Holy Name Society and served as a Sunday Mass usher.

In addition to his parents, Oscar was preceded in death by his sister, Margaret Kroll Wallace.

A Mass of Christian Burial was held in St. Nicholas Church, Wilkes-Barre.  Interment with Military Honors was in St. Mary’s Cemetery, Hanover Township.

In lieu of flowers, memorial donations may be made in Oscar’s memory to the Blue chip Farm Animal Refuge, 974 Lockville Road, Dallas, PA  18612.

Online condolences may be sent by visiting Oscar’s obituary at www.natandgawlas.com.