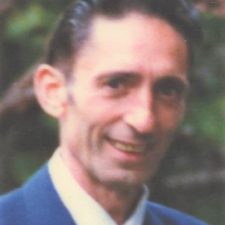 Peter J. Thiel, 87, of Wilkes-Barre, passed away on Thursday, January 6, 2022, at the Department of Veterans Affairs Medical Center in Plains Township.

He was born in Wilkes-Barre, a son of the late Alfred C. and Anna Kratz Thiel. Peter attended E.L. Meyers High School, Wilkes-Barre. He was a proud veteran of the United State Navy, having served during the Korean War.  Peter was formerly employed by the National Hose Company in New Jersey and he was later employed at St. Nicholas and St. Boniface Parishes in Wilkes-Barre.  Prior to his retirement, he was employed at Thomas C. Thomas in Wilkes-Barre.

He was preceded in death by his brothers Alfred and Louis Thiel and by his sisters Katherine Kwarcinski, Elizabeth Gallagher and Martina Augustine.

Funeral services will be held on Wednesday at 9:30 A.M. from the Nat & Gawlas Funeral Home, 89 Park Avenue, Wilkes-Barre, with a Mass of Christian Burial to follow at 10 A.M. in St. Andrew Parish, 316 Parrish Street, Wilkes-Barre. Interment will be in St. Mary’s Cemetery, Hanover Township.

Friends may call on Tuesday from 2-4 P.M. at the funeral home.

Condolences can be sent by visiting Peter’s obituary at www.natandgawlas.com.