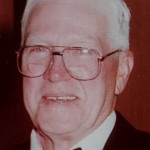 Raymond F. Cronauer, 92, of Wilkes-Barre, passed away on Thursday at his home.

He was born in Wilkes-Barre, a son of the late Clarence and Mildred Miller Cronauer.  Ray was a 1945 graduate of St. Nicholas High School in Wilkes-Barre.  He formerly owned and operated Clarence B. Cronauer and Son Electric. Ray served as the Chairman of the Examiners Board for Electricians for the City of Wilkes-Barre and as a member of the Board of Directors of the National Electrical Contractors Association.

He was preceded in death by his first wife, Nancy Basler Cronauer in 1995 and by his second wife, Mary Ellen McCabe Woods Cronauer in 2019.   He was also preceded in death by his brothers, Clarence and Robert Cronauer; brothers-in-law, Claude, Joseph and Matthew Basler; sister-in-law, Marion Basler; stepdaughter-in-law, Sandy Woods and stepson-in-law, Neil Wolsieffer.

A Mass of Christian Burial will be held on Monday at 10 am in St. Nicholas Church, 226 S. Washington Street, Wilkes-Barre.  Interment will be in St. Mary’s Cemetery, Hanover Township.

Online condolences may be sent by visiting Raymond’s obituary at www.natandgawlas.com.