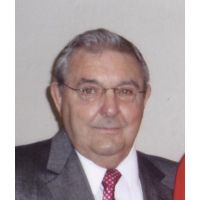 He was born in Sugar Notch on April 8, 1925, the son of the late John and Bruna Cardoni Bianconi. Ray was a 1943 graduate of the Valley Forge Military Academy. During World War II, he served with the US Army Cadre at Camp Lee, Virginia and as an Army Paratrooper with the 13th Airborne Division.

Prior to his retirement, he was employed for many years as an electrician with the I.B.E.W., Local 163. He was a member of St. Robert Bellarmine Parish at St. Aloysius Church in Wilkes-Barre.

Ray served for many years as a volunteer at the Department of Veterans Affairs Medical Center in Plains Township. He was a member of the Disabled American Veterans, Chapter 32, the Hanover AMVETS Post 59, and the Italian American Veterans, who named him â€˜Man of the Yearâ€™ in 1991. He was also a member of UNICO, the Sons of Italy, Knights of Columbus Council 984 and a 4th Degree Member of the Bishop Hafey Assembly of the Knights of Columbus.

Ray was a loving and devoted husband, father and proud grandfather. Ray loved watching his grandchildrenâ€™s sporting events, the New York Yankees and Penn State Football. He will always be remembered for his honesty and generosity to all. He loved his faith, heritage, family and country. He will be missed dearly by everyone who knew him.

Surviving are his children, John Bianconi, Wilkes-Barre, Penny Bianconi Erwine and her husband, Charles, Bear Creek and Gina Raineri and her husband, Tony, Shavertown; grandchildren, Tony, Gino and Mia Raineri; and by numerous nieces and nephews.

A Private Mass of Christian Burial will be held at the convenience of the family in St. Robert Bellarmine Parish at St. Aloysius Church. Private entombment will be in St. Maryâ€™s Cemetery, Hanover Township.