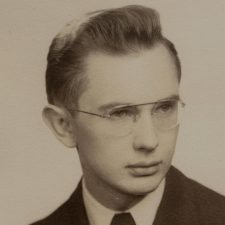 Robert A. Zinn, 96, formerly of Wood Street, Wilkes-Barre, went to be with his Lord and Savior on Thursday, September 5, 2019, at the Riverstreet Manor in Wilkes-Barre.

He was born on March 15, 1923 in Wilkes-Barre, a son of the late August and Margaret Williams Zinn.  Bob was a member of Calvary Bible Church in South Wilkes-Barre, where he attended for 70 years. He was privileged to serve as the secretary of the Sunday school for 52 years. The church was originally founded in 1941 and was called the Gospel Center Tabernacle. It was located on lower South Franklin Street in what is now the parking lot of Schiel’s Family Market. The founder and long-time pastor was Bob Matthews. The current pastor is Sam Garnett.

Bob attended the Conyngham Elementary School on Westminster Street in South Wilkes-Barre and the Dr. Elmer L. Meyers Memorial High School, graduating in 1941. During his six years at Meyers, he missed only one day. Later, Bob attended two Evangelical Christian Colleges, including The King’s College, New Castle, Delaware, graduating in 1950 with a BA in Psychology. He also attended Shelton College in New York City for one year.

Bob worked for many years in his father’s grocery store on Wood Street. Later he was employed by the Pennsylvania Department of Welfare for 20 years, the first year as a clerk-typist and the last 19 years as a caseworker at the County Public Assistance Office, retiring in 1986.

Bob was a veteran of the Armed Services, serving for three years in the United States Army.

In addition to his parents, he was preceded in death by his brothers, L. William Zinn in 1992 and Donald C. Zinn in 2009.

He is survived by his two nephews, Keith and Harold Zinn.

Funeral services will be held on Monday at 11 AM from the Nat & Gawlas Funeral Home, 89 Park Avenue, Wilkes-Barre. His pastor, Rev. Sam Garnett, will officiate. Interment will be in Mount Greenwood Cemetery, Trucksville.

Friends may call on Monday at the funeral home from 10:30 AM until the time of the service.

In lieu of flowers, memorial donations may be made to the Calvary Bible Church, 410 South River Street, Wilkes-Barre, PA 18702.

Online condolences may be made by visiting Bob’s obituary at www.natandgawlas.com.