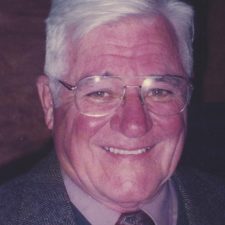 Robert J. Ell, 95, of Wilkes-Barre and Falls, passed away on Monday, April 19, 2021, surrounded by his loving family. He was born July 7, 1925, a son of the late Marian Frank Ell and Edward J. Ell. He attended St. Nicholas High School and then King’s College, graduating in the first class of 1950. Upon graduation from King’s College he received a Leadership Award for extra-curricular activities as student editor of the college newspaper, The Crown, and editor of the college yearbook, The Regis, and as student president of the college glee club.

He served over two years in Military Service with the U.S. Army during World War II.  Serving in the European Theater.

Upon graduation from King’s College in June of 1950, he started working at the college as Alumni Director and Placement Director.  Bob continued in these capacities until 1968 when the positions were separated. After serving a few years in a fundraising/development position, he returned to the position of Alumni Director in 1973 and continued as such until retirement in January, 1992.  He remained at the college in the alumni department in a part-time capacity for one year later.

Bob was very honored and humbled to have the Robert J. Ell Scholarship Award established through the generosity of King’s Alumni. This scholarship has benefited many students through the years.

He was the recipient of numerous awards during his time at King’s College and most recently awarded The Spirit of Holy Cross Award which he considered to be one of the highlights of his life.

In addition to his parents, he was preceded in death by his brother Edward Ell, his nephew Ned and wife Dianne Ell, as well as his closest friend and companion, Jean Foley.

Bob is survived by his children Robert C. Ell and his wife Babette of Plains, Christine and Larry Darby of Pittston, and Bonnie and Bruce Kunkle of Orange; grandchildren Bruce Kunkle and his wife Cynelle, Tami and her husband Matt Walsh, and Morgan Kunkle; Kate Darby and her fiancé Mike Sobeck; Zach Ell and his wife Christian, Dalton Ell, Greta Ell and Tucker Ell; great-grandchildren Kingsley and Alaric Kunkle; Henry and Rawlings Ell; sister-in-law, Florence Ell.

Bob will be truly missed by his loving family and many wonderful friends. A walk-through visitation will be held at the Chapel of Christ the King, King’s College Campus, 29 W. North Street, Wilkes-Barre, PA 18711 on Thursday, April 22 from 6-8pm.

A Mass of Christian Burial will be celebrated at 10:00 am Friday, April 23 in St. Nicholas Church, 226 South Washington St., Wilkes-Barre.  Those attended the Mass are asked to go directly to the church on Friday morning.

Social distancing and masks required for both viewing and funeral service.

In lieu of flowers any contributions can be made to The Robert J. Ell Scholarship Award, King’s College.

Condolences may be sent by visiting Bob’s obituary at www.natandgawlas.