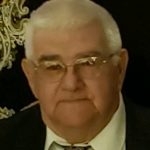 Bob was born in Wilkes-Barre, a son of the late Ozwald and Catherine Finn Paul. He was a graduate of G.A.R. Memorial High School. Prior to his retirement, Bob had been employed by Genetti’s Market, Sunshine Market, Thomas’s English Muffins and Schiel’s Market. Bob served with the 109th Field Artillery Army National Guard and the U.S. Army Reserves.

Bob was a devoted member of St. Andrew Parish in Wilkes-Barre, where he faithfully served as a Eucharistic minister. He also served as a basketball coach, and he was the biggest supporter and fan of his grandchildren in all that they did.

He was preceded in death by his wife, the former Catherine Eyerman, in 2013, and by his sisters, Doris Paul, Evelyn Rajnik and Lois Sauer.

Robert’s family would like to extend a special thank you to Dr. Patrick Kerrigan and his staff for their tremendous care.

Due to Coivd-19, the funeral will be private and held at the convenience of the family. There will be no calling hours.

A public celebration of Bob’s life and a Mass of Christian Burial will be held at a later date.

Condolences can be sent by visiting Bob’s obituary at www.natandgawlas.com.