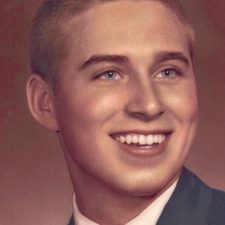 Robert J. Sunday of Wilkes-Barre, 85, passed to our Lord while surrounded by his loving family on Sunday, November 20, 2022.

Bob (BobPop, Bobby, Sunny, Ozzy, Hunk) was born in his family’s home on the corner of Horton and Carlisle St. on September 4, 1937 to the late Anthony and Matilda Kneidinger Sunday. He attended St. Boniface Elementary School and graduated from G.A.R. Memorial High School, class of 1955. He enlisted in the US Air Force after graduating, serving in the Arctic Circle in Baffin Island, British Columbia, Mississippi, Nevada, and California, where he had many exciting adventures. He was an airman first class, radra/air traffic control, as well as a disc jockey on the base’s airwaves. After serving for four years Bob returned home and attended Penn State University, Wilkes-Barre campus.

Bob’s exceptional work ethic began as a teenager while delivering the evening edition of the Times Leader. Little did he know he was delivering the paper to his future wife, Jeanne Marie Kilgallon, when she was 6 and he was 12. He also worked for his uncle as a painter, painting at great heights such as the Luzerne County Courthouse dome. Bob spent 40 years at Certainteed Saint Gobain, Mountaintop as a furnace teaser, where he took great pride in his work and made many lifelong friends.

He married the love of his life Jeanne Marie Kilgallon on May 26, 1962 and they recently celebrated their 60th wedding anniversary together. He was the proud father of one daughter, Lisa Sunday-Lefkowitz (Jay Lefkowitz), with whom he resided for the last 18 months, thriving under Lisa and Jay’s unwavering care at Shickshinny Lake. He was also a phenomenal grandfather to grandsons Noah Sunday-Lefkowitz and Levi Sunday-Lefkowitz.

Bob thrived in nature and the outdoors. He was a master fisherman in streams, rivers, and lakes. Throughout his life he taught many how to fish. He was a skilled bow hunter and marksman, and enjoyed preparing and cooking his bounties. He grew a large home vegetable garden, cooking and canning his harvest. His chili sauce and hot peppers in oil were coveted condiments. He was a frequent blood donor, as O negative was always in demand. He enjoyed the simple things in life such as cooking ham and kielbasa at the holidays, eating, reading western novels, playing cards, taking drives, completing crossword and jigsaw puzzles, attending Penguins hockey games with close friends, and traveling with Jeanne Marie to destinations across the globe including Canada, Bermuda, the Caribbean, Alaska, Italy, Nashville, New Orleans, San Francisco, Lancaster, and 28 cruises. He was happiest at home and when spending time with his family and friends and caring for others.

A devoted grandfather, Bob retired to spend more time with his grandsons. He prepared them pancakes for breakfast, read them the classics, and drove them to school every day from kindergarten until they graduated high school. As they grew older he and Jeanne Marie actively supported all of their activities and performances, cheering them on with pride.

He was a friend to all with sparkling blue eyes and a big smile, quick wit, hearty laugh, and willingness to lend a hand. Those that knew him were always entertained by his storytelling, delightful duck and crow calls, and trademark yodel. He touched the lives of many and was well loved by family, friends, and neighbors alike. He pulled though countless medical conditions over the years, surviving like a cat with nine lives. He lived life with resilience, selflessness, and a positive attitude. Bob was an ordinary man who lived an extraordinary life.

He was a proud member of the Knights of Columbus. He was a member of Saint Boniface Church before its closing and now St. Nicholas Church, Wilkes Barre. He was a long-time volunteer at the Mercy Hospital and John Heinz Institute in their Pastoral Care Program, where he was awarded volunteer of the month.

He was preceded in death by parents, Anthony and Matilda Sunday, grandparents, sister Millie Sunday Stoodley. He is survived by wife Jeanne Marie, daughter Lisa, husband Jay, and grandsons Noah and Levi.

In lieu of flowers, donations can be made in Bob’s honor to Blue Chip Farm Animal Refuge, Hospice of the Sacred Heart, or St. Jude’s Children’s Research Hospital.