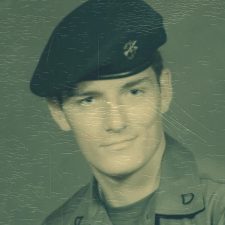 Robert W. Morgans, 69, of Wilkes-Barre passed away Sunday July 25, 2021, at home.  He was born in Fort Campbell, KY to the late Robert J. and Rose Cera Morgans.  Robert was a Graduate of G.A.R. Memorial High School, Wilkes-Barre. After graduation, Robert enlisted in the U.S. Army where he achieved the rank of Sergeant in the 5th Special Forces Regiment Fort Bragg, NC attached to the 82nd Airborne Division.  He was employed as a Connector for 38 years with the International Assoc. of Ironworkers Local 489. Robert was also a Helper with the International Brotherhood of Boilermakers.

Robert was a member and Chaplin of the Fraternal Order of Eagles, Wilkes-Barre, and American Legion, post 132.  He was prolific at crossword puzzles, bragging he beat Bill Clinton’s time to complete the Sunday NY Times puzzle.  Robert had an intense passion for the Army Special Forces, Veterans and Ironwork. He lived, ate, slept, and dreamed the two.  Robert had a giant soft spot for his grandchildren and loved being a Pop Pop.

A Funeral service will be held at 10:00 a.m. Friday July 30, 2021, at the First Presbyterian Church of Wilkes-Barre with the Rev. Dr. Robert Zanicky and Rev. Daniel A. Toomey officiating.

Interment with Military honors will be in OakLawn Cemetery, Hanover twp.

Online condolences can be made by visiting Robert’s obituary on the funeral home website.

In lieu of flowers memorial donations can be made to The Gary Sinise Foundation, P.O. Box 368, Woodland Hills, CA 91365 www.garysinisefoundation.org