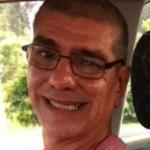 Robert W. Rushton, 56, of Wilkes-Barre, passed away on Tuesday at his home.

Robert was born in Wilkes-Barre, a beloved son of the Betty Lou Woods Rushton of Wilkes-Barre and the late Edward Ruston. He was a graduate of G.A.R. Memorial High School, Class of 1982. He was a truck driver for the Harrisburg News Company.

In addition to his father, he was preceded in death by his son Ryan Rushton; grandchildren, Dylan and Dakota; brother, Frank Rushton; and sister, Winnie.

Private funeral services will be held at the convenience of the family.

Condolences can be sent by visiting Robert’s obituary at www.natandgawlas.com.