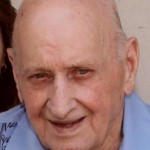 He was born in Wilkes-Barre, a son of the late Leroy and Sophia Trudnak Thomas.  Bob was a graduate of Meyers High School.  He was an Army veteran serving during the Korean War.  He was formerly employed at the Atwater Throwing Company in Wilkes-Barre.

He was a member of Hanover Township American Legion Post# 609.  Bob was also an avid football fan, card player and fisherman.

Funeral Services will be held on Tuesday at 9:30 am from the Nat & Gawlas Funeral Home, 89 Park Avenue, Wilkes-Barre, with a Mass of Christian Burial to follow at 10 am in St. Nicholas Church, 226 S. Washington Street, Wilkes-Barre.  Interment will be in St. Mary’s Cemetery, Hanover Township.

Friends may call on Monday from 5 – 7 pm at the funeral home.

Online condolences may be sent by visiting Bob’s obituary at www.natandgawlas.com.