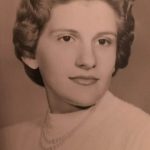 Rose Mary was born October 13, 1937, in Wilkes-Barre, PA, to the late Edoardo and Marianna Casella.  A 1955 graduate of G.A.R. high school, she received a B.S. in Medical Technology from Wilkes College in 1959, as well as certifications from Penn State University, Temple University, and Slippery Rock University.  Rose Mary broke many glass ceilings in her professional journey.  She was the first female to head the cytology laboratory at Mercy hospital in Wilkes-Barre, PA, before establishing her own successful laboratory in Allentown, PA.

Above all of her professional and personal accomplishments, the title that she cherished the most was ‘mom’. In 1973, during the second act of her life, Rose Mary married her adoring husband Orlando Richard Bellomo. The couple moved to Mountaintop, PA, where they raised a family and opened “Bellomo and Sons” grocery store.

Rose Mary was also a gifted musician and teacher.  She was a member of the Wyoming Valley Oratorio Society and served as the church organist at First Assembly of God in Wilkes-Barre for many years.  Beyond academics, she understood the importance of music in the lives of children (her own and others’). From a piano studio in her home, she shared with her students her love for music along with valuable life lessons. She was an amazing teacher and considered a mother by many.

Rose Mary was deeply involved in her children’s lives and her community through many leadership positions of service.  She was PTA president at both Fairview elementary and Crestwood High Schools, and  the president of the Crestwood Band Parents Association.  She spent many of her greatest days supporting the Wilkes University Conservatory of Music, and the Encore music camp, where she was beloved by the staff and students.

In Heaven, Rose Mary will join her husband of 43 years, Orlando, her brother Alfred Casella, and her sister Lillian Zigmont.

A private service will be held for immediate family at her final resting place, Maple Hill Cemetery in Hanover Township, PA

The family requests that in lieu of flowers, please call somebody and tell them that you love them.

Condolences may be sent by visiting Rose Mary’s obituary at www.natandgawlas.com.