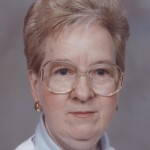 Ruth A. Albrecht, 87, of Wilkes-Barre, passed away on Sunday in Allied Services Meade Street Skilled Nursing in Wilkes-Barre.

She was born in Wilkes-Barre, a daughter of the late Richard F. and Grace B. (Evans) Albrecht.  Ruth was a 1950 graduate of G.A.R. Memorial High School.

She was formerly employed by the RCA Corp. in Mountain Top and she was later employed at Trion Industries, Inc., Wilkes-Barre, prior to her retirement.

Ruth was an active member of St. Mark’s Lutheran Church in Wilkes-Barre, where she served for many years as the secretary and treasurer.  She was devoted to her bible study. Ruth was also active as a cookie and pasty maker at her church.

In addition to her parents, she was preceded in death by her brother, Richard Albrecht; brother-in-law, Richard Widman and her niece, Debbie Widman.

Funeral Services will be held on Wednesday at 11 am from the Nat & Gawlas Funeral Home, 89 Park Avenue, Wilkes-Barre.  Rev. Mary E. Laufer will officiate.  Interment will be in Hanover Green Cemetery, Hanover Township.

Family and friends are invited to a visitation from 9:30 – 11 am on Wednesday at the funeral home.

Online condolences may be sent by visiting Ruth’s obituary at www.natandgawlas.com