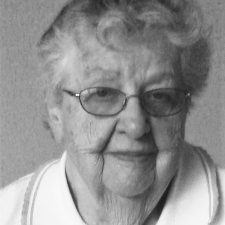 Ruth Williams Gardner, 97, entered life eternal April 21 at the Wesley Village campus of United Methodist Homes in Pittston surrounded by family.  A former resident of Mountaintop, she moved to Brooks Estates in 2004.

Born August 28, 1924, she was the daughter of the late Harry and Martha Nickel Williams. She grew up in the Newtown section of Ashley and graduated from Hanover High School. She moved to Philadelphia and lived with her aunt, Ruth Crimmins, while attending Peirce College. After graduation, she worked for the Pennsylvania Railroad, where she met and married Edward F. Gardner.

The couple returned to Wyoming Valley in 1950 to found Gardner Rubber Stamp Company and worked together until Ed’s retirement in 1982. Married for 48 years until Ed’s death in 1995, they were the proud parents of a son, Gary Edward.

Ruth was a loving, supportive, and devoted wife, mother, mother-in-law, and grandmother. Her grandson Matthew Gary was the light of her life; he kept alive his grandfather’s love of railroading and was a constant source of pride to her.

Ruth was a kind, gracious, and generous woman who will be remembered for her strength, loyalty, sense of humor, independence, and devotion to family. She continued to work until she was 80, enjoyed reading, doing cross stitch and knitting, and spoiling her pet dogs over the years.

She was a lifelong and oldest member of Ashley Presbyterian Church and she also attended Good Shepherd Lutheran Church with her family.

She was preceded in death by her parents, husband, infant son, and brother.

The family would like to thank the Wesley Village community and the staff of Hospice of the Sacred Heart for their care and support.

A visitation for family and friends will be held on Sunday from 2-4 pm at the Nat & Gawlas Funeral Home, 89 Park Avenue, Wilkes-Barre.  Funeral Services will be held on Monday at 11 am in the Ashley Presbyterian Church, 32 N. Main Street, Ashley. Her Pastor, Rev. Rebecca Tanner will officiate.   Those attending the service are asked to go directly to the church.  Interment will be in Maple Hill Cemetery, Hanover Township.

Memorial Donations in lieu of flowers may be made to Wesley Village, Hospice of the Sacred Heart, or Ashley Presbyterian Church.

Condolences may be sent by visiting Ruth’s obituary at www.natandgawlas.com.