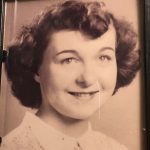 Shirley Mae (Shaver) Hicks, 90, formerly of Wilkes-Barre and Kunkle, passed away on Sunday, surrounded by her loving family at the home of her daughter, Judy, in Dallas.

Funeral services will be held on Thursday at 11 am from the Nat & Gawlas Funeral Home, 89 Park Avenue, Wilkes-Barre.  Deacon William Behm will officiate.  Interment will be in St. Mary’s Cemetery, Hanover Township.

Friends may call from 10-11am on Thursday at the funeral home.

Those attending the visitation and service must wear a mask and abide by social distancing requirements.

In lieu of flowers, memorial donations may be made to the St. Vincent DePaul Kitchen, 39 E. Jackson Street, Wilkes-Barre, PA  18701.

Condolences may be sent by visiting Shirley’s obituary at www.natandgawlas.com.