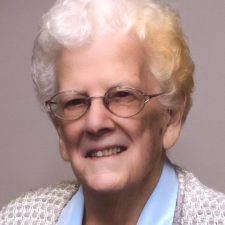 Sister Miriam Butz a member of the Institute of the Sisters of Mercy died peacefully at Mercy Center Dallas, PA on Sunday June 28, 2020.  She was born February 2, 1922 in Lancaster, PA and was the daughter of Harry and Emma Weimer Butz.

Sister Miriam received her Bachelor’s Degree from Misericordia University and her Master’s Degree from Villanova University. She entered the Sisters of Mercy September 8, 1939 and professed her vows on March 12, 1942 when she was given the name Sister Amabilis.

Sister Miriam’s ministry years in education were lived mainly in her home diocese of Harrisburg. She taught at Bishop McDevitt High School in Harrisburg for 14 years, and also managed the school year book and newspaper. Following that, she spent 33 years as principal at both St. Theresa School in New Cumberland and at Our Lady of the Blessed Sacrament in Harrisburg. Later, she returned to Our Lady’s as teacher and also taught at St. Margaret Mary School. With the closing of school, Sister Miriam returned to Dallas and volunteered her services.

Sister Miriam was a joy to be around. She enjoyed telling and listening to stories. Her birth date was always a topic of conversation for it was 2-2-22. The date could not be forgotten for it brought her such joy and always a celebration with friends. Her love of nature and kittens were her delights and comfort after her years of active ministry.

Sister is survived by her dedicated nieces and nephews, the Sisters of Mercy, Sisters Maureen McCabe and Esther O’Konski who were faithful companions in her life journey.

Her funeral arrangements are private for now. At a later date there will be a Liturgical Celebration of her life.

Online condolences may be sent by visiting Sister Miriam’s obituary at www.natandgawlas.com.