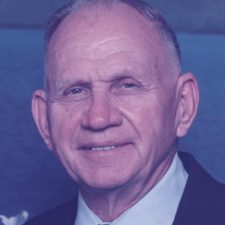 He was born in Plymouth on December 26, 1923 the oldest of child of the late George and Theodora (Dorothy) Blaskiewicz Strumski. Stephen was a member of St. Therese Church in Shavertown for over 60 years.

Stephen was part of the greatest generation; he proudly serviced his country in the Navy during World War II as an airplane mechanic.

Stephen worked at Stegmaier Brewery as a truck mechanic for 27 years. He then worked at Robbins Door and Sash until he retired.

Stephen was a master gardener, he could grow anything. He always believed in feeding plants just the way people have to eat to grow.  You could always find him working in the garden or with his apple trees.

Stephen was preceded in death by his wife, the former Ann Altavilla Strumski, who passed away in 2015, his oldest son Stephen Strumski Jr.; and his brother George Buzz Strumski.

Stephen will be sadly missed by his children, Suzanne Banks and her friend Ed, Luzerne; Jo Ann Strumski at home; and Joseph Strumski and his wife Kelly, Wyoming; and also his grandchildren, Darnetta Yusko and her husband, John, Plymouth; Stephen and Kaitlyn Strumski, Wyoming; Jeanine Crepault and her husband, Dave, Niceville, FL; sister, Eleanor Banta, of Glastonbury, CT; and many great grandchildren; nieces and nephews.

Stephen’s family would also like to share their deep gratitude to all the wonderful and dedicated nurses and staff at Timber Ridge Health Care Center for the deep compassion and grace they showed to Stephen and his family during a time when, due to the current situation in the world, his family was not able to be with him.

Because of the social distancing guidelines, there was no public viewing. Private funeral services were held at the convenience of the family.  Interment was in Mount Olivet Cemetery, Carverton.

Online condolences may be sent by visiting Stephen’s obituary at www.natandgawlas.com.