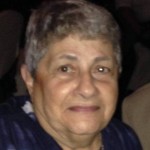 Terry was born on August 15, 1937 in Wilkes-Barre. She was a daughter of the late Michael (Shiban) and Sophia John Gonda. Terry was a proud graduate of G.A.R. Memorial High School, class of 1955.

On November 30, 1957, she married Anthony Thomas and they became parents of 4 children.

She was employed by Lehigh Trouser and then left the work force to raise her children. Terry was then employed for 37 years as a Cook/Manager in the Food Service Department of the Wilkes-Barre Area School District having worked at Heights Elementary and G.A.R. Memorial High School. At G.A.R. she was an “icon” for preparing and feeding thousands of students and employees with her “very own” homemade recipes. Until this day, “her kids” will call or post asking for her recipes, especially her homemade chicken wing stromboli and mac and cheese.

Terry was a lifetime and very active member of St Anthony + St George Maronite Catholic Church, Wilkes-Barre. She was a member of its Altar & Rosary Society and many Church Bazaar Committees. She was also a member of the Knights of Lebanon Auxiliary.

Terry was also affiliated with the family business, Tony Thomas’ Deli and Catering and was a staple of the concession business. She loved seeing and talking with her fellow vendors and customers. Her homemade stuffed grape leaves will forever be legendary.

“Mama T”, as she was affectionately known to many, also loved preparing many Lebanese delicacies. Her home was filled during the holidays and daily with many of her family, friends and the friends of her children and grandchildren. No one ever left her home hungry, even if it was with a bologna sandwich.

Funeral Services will be held on Saturday, November 16, 2019, at 9:30 AM from the Nat & Gawlas Funeral Home, 89 Park Avenue, Wilkes-Barre, with Divine Liturgy to follow at 10 AM in St. Anthony + St. George Maronite Catholic Church, 311 Park Avenue, Wilkes-Barre. Rev. Paul Damien will officiate. Entombment will be in St. Mary’s Cemetery, Hanover Township.

In lieu of flowers, memorial donations can be made to “570 On the Go” Free Fitness Camp/Clinic For Area Children, 407 East Northampton Street Wilkes-Barre, PA 18702; CHOP: Children’s Hospital Of Philadelphia: give2chop, or Terry’s family who will in turn donate to local charities.

Online condolences may be sent by visiting Terry’s obituary at www.natandgawlas.com.