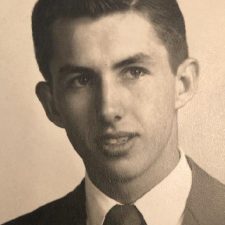 Theodore Krasnahill, 89, of Hanover Township passed away on Thursday, November 10, 2022 at the Department of Veterans Affairs Medical Center, Plains Township.

He was born in Wilkes-Barre, a son of the late Alexander and Catherine Wytosh Krasnahill.  Theodore was a graduate of Wilkes-Barre Township High School Class of 1952.  He obtained his certification in welding through the G.I Bill.  He served in the United States Army during the Korean War, attaining the rank of Corporal.  He was the recipient of the European Occupation Medal, the National Defense Service Medal and the Good Conduct Medal.

Theodore was employed as a machinist at the Balester Optical Company in Wilkes-Barre for 29 years. He later worked at the Bon-Ton for nine years, before being the faithful caretaker of his wife.

He was a member of St. Robert Bellarmine Parish at St. Aloysius Church in Wilkes-Barre and the Hanover Township American Legion, Post 609.

Teddy enjoyed spending time outdoors, hunting, fishing and walking.  His favorite activities centered around his family.  He was extremely proud of his grandchildren, faithfully supporting them and attending their activities.

Funeral Services will be held on Tuesday at 9:30 A.M. from the Nat & Gawlas Funeral Home, 89 Park Avenue, Wilkes-Barre, followed by a Mass of Christian Burial at 10:00 A.M. in St. Robert Bellarmine Parish at St. Aloysius Church, Barney and Division Streets, Wilkes-Barre.  Interment will be in St. Mary’s Cemetery, Hanover Township.

Online condolences can be made by visiting Theodore’s obituary at www.natandgawlas.com.