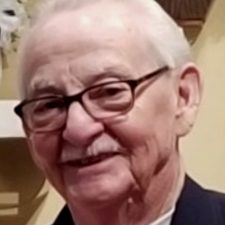 Tom was born in Wilkes-Barre, a son of the late Franklin and Marie Rollman Dougher. He was a graduate of St. Nicholas High School, Class of 1956. He served in the U.S. Navy from 1956 to 1959.

Tom was employed by the International Union of Operating Engineers, Local 542. He was a member of St. Nicholas Roman Catholic Church in Wilkes-Barre.

The family would like to express their heartfelt gratitude to the community of healthcare professionals, including Dr. Bruce Saidman and his team, the nursing staff that attended to Tom during his illness and finally, the caring and compassionate hospice nurses and aids.

Private funeral services will be held for the immediate family. Interment will be in St. Mary’s Cemetery, Hanover Township. A public celebration of Tom’s life and a Memorial Mass will be held at a later date.

In lieu of flowers, donations can be made in Tom’s name to the Saint Vincent de Paul Kitchen C/O Catholic Social Services, 33 East Northampton Street, Wilkes-Barre, Pa 18701 or to a charity of your choice.

Online condolences can be sent by visiting Tom’s obituary at www.natandgawlas.com.