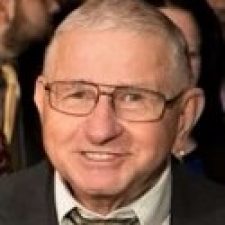 He was born in Warrior Run October 29, 1937 to Edward and Alice Zulkoski. Shortly after graduation from Warrior Run High School, Vic married the love of his life, the former Grace Gallagher. Their 68-year marriage was blessed with 6 children, 15 grandchildren, and 7 great grandchildren.

Vic was employed for many years as a driver for Wilson Meat Packing Company. Afterward, he was a custodian in the Wilkes-Barre Area School District until his retirement. He was also well known as a popular bartender at the Silver Queen Hotel, and a long time Little League coach. He enjoyed spending time with his family, the occasional trip to the Delaware shore, and an annual pilgrimage to Notre Dame during football season. Vic always enjoyed meeting and talking to new people, he had the ability to turn a complete stranger into an old friend within minutes.

In addition to his parents, Vic was preceded in death by his brothers Edward, Stanley, Leonard and Richard Zulkoski, and his sisters Helen Farr, Jean Taddio, Alice Van Why and Dori Zulkoski.

Funeral services will be held on Saturday, April 9, 2022 in St. Nicholas Church, 226 S. Washington Street, Wilkes-Barre. Visitation will be from 9 to 11 AM at the Church, followed by a Mass of Christian Burial at 11 AM. Interment will be in St. Mary’s Cemetery, Hanover Township.

The family would like to express its sincere gratitude to a special group of nurses in the Geisinger Wyoming Valley Intensive Care Unit: Fran Vasquez, Lauren Burrow, Briana Picht and Anna Totsky, and to Drs. Paul Arkless, Sree Naik, and Raghva Reddy Levaka Vera.

Condolences may be sent by visiting Vic’ s obituary at www.natandgawlas.com.