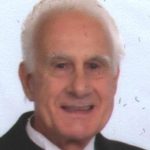 Walter S. Grabowski, 81, of Wilkes-Barre, passed away on Thursday, December 10, 2020, at the Gardens at East Mountain.

Walter was born in Jersey City, NJ, a son of the late Walter and Constance Kuchinsky Grabowski. He was raised in Frackville. At the age of 13, Walter lost his father and attended the Milton Hershey School for fatherless boys. He graduated with many skills for his life time jobs. Walter retired as a union painter at PSEG in Newark, NJ. Walter proudly served in the Marine Corps.

Walter could always be seen with a big smile and telling funny tales. He was a member of the Knights of Columbus Council 302. Walter was a creative person. He patented a game called “Center Point,” which he played at fairs and at the Osterhout Library in Wilkes-Barre.

Walter will be missed by all who knew him. May he rest in peace from the suffering he had from a lengthy illness.

He was preceded in death by his brother, Leo and sister, Mary.

Surviving are his wife, Rosalie Susek Grabowski; by his sons, Walter Jr., Christopher and Peter; brother, Joseph and sister, Mildred; nieces and nephews.

Due to COVID 19 services will be private and at the convenience of the family.

A memorial service celebrating Walter’s life will be held at a later date.

Condolences can be sent by visiting Walter’s obituary at www.natandgawlas.com.