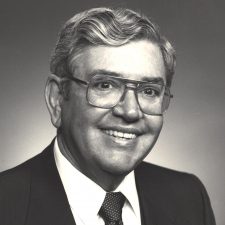 He was born in Wilkes-Barre, the son of the late Robert and Laura Roberts Simmers. Wesley was a graduate of G.A.R. Memorial High School, class of 1943 and obtained an Associate’s Degree from the University of Pennsylvania Wharton School of Accounts and Finance.  He was a proud Army veteran who served in Europe during World War II.

Wesley was a distinguished and revered member of the local banking community holding senior level positions in several banking institutions and retiring as the President and CEO of Valley Community Bank. During his long career, Wesley served as an officer in numerous banking organizations including the Pennsylvania Bankers Association, American Bankers Association, PA Development Credit Corporation and served as National President of the American Institute of Banking.

In addition to his banking industry affiliations, Wesley was a dedicated member of his community serving as an officer or on the boards of many local organizations including; The Economic Development Council of Northeastern PA; Redevelopment Authority of Wilkes-Barre; Osterhout Free Library; Clear Brook Inc.; Penn’s Woods Council of the Girl Scouts of America; Lutheran Welfare Services; Greater Wilkes-Barre Chamber of Commerce; Mental Health Association of Luzerne County; Penn State Wilke-Barre Campus; Oaklawn Cemetery; United Way; Wyoming Valley Council of Churches; Saint David’s Society of Wyoming Valley Inc.; as well as serving on the Luzerne County Board of School Directors.

In addition to his parents, Wesley was preceded in death by his loving wife of over 75 years, Miriam Irene Kaiser Simmers; son, Wesley B. Simmers, Jr.; and sisters, Margaret Mullen and Carol Skumanich.

Wesley was a gentleman’s gentleman and possessed the magical ability to truly connect with anyone he ever became associated with.  He had an intense love and sense of loyalty to his family and friends.  His achievements and success in life could not have been possible without the partnership he shared with his wife Miriam, who was the love of his life.  The bond they shared truly exemplified the spirit of true love.   Wesley was also a deeply religious man and his kind and good-natured spirit can be clearly traced to his strong faith.

A Memorial Service will be held on Sunday, March 6, 2022 at 3 pm in the First Presbyterian Church, 97 S. Franklin Street, Wilkes-Barre.  Rev. Dr. Robert M. Zanicky will officiate.  The family will receive those wishing to offer condolences at the Church on Sunday from 1:30 pm until the service time.

Interment will be private and at the convenience of the family in Oak Lawn Cemetery, Hanover Township.

Memorial donations may be made to the First Presbyterian Church, 97 S. Franklin Street, Wilkes-Barre, PA  18701.

Condolences may be sent by visiting Wesley’s obituary at www.natandgawlas.com.