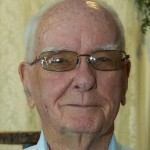 William G. Langdon, 97, of the Lee Park Section of Hanover Township, passed away on Sunday in The Gardens at Tunkhannock.

He was born in Wilkes-Barre a son of the late William and Cecelia Langdon.  Bill was an Army Air Force veteran, serving in Italy during World War II.  He was the recipient of the E.A.M.E. Service Medal, the World War II Victory Medal and the Good Conduct Medal.

Bill was employed by N.E. Bank Maintenance Department and later by Susquehanna Savings and Loan in numerous positions.  He retired as a Property Management Supervisor for Atlantic Financial.

He was a longtime member of St. John’s Lutheran Church  Bill was a lifetime member of the Elk’s Lodge # 109, where he served as a Trustee for over 46 years and he also served on numerous committees over the years.

Bill loved to travel with his family and friends.  He will be sadly missed by those who loved him.

Bill is survived by his brother-in-law, John Murray and his wife, Jean, Dallas and by his numerous nieces and nephews.

Funeral Services will be held on Wednesday at 1 pm from the Nat & Gawlas Funeral Home, 89 Park Avenue, Wilkes-Barre.  Rev. Wayne Kaufman will officiate.  Interment will be in Fern Knoll Burial Park, Dallas.

Friends may call on Tuesday from 5 – 7 pm at the funeral home.

In lieu of flowers memorial donations may be made to the Elk’s Lodge# 109, 39 Evans Street, Kingston, PA  18704 or to the charity of the donor’s choice.

Online condolences may be sent by visiting Bill’s obituary at www.natandgawlas.com.