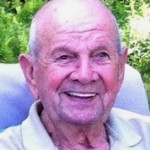 William J. Lewis, 94 of Wilkes-Barre passed away peacefully on Saturday, March 28, 2020, surrounded by his children.  Bill was born in Wilkes-Barre, on April 27, 1925, the son of John and Helen Umlah Lewis.  He was the last surviving of their 14 children.

Bill attended Wilkes-Barre Area Schools before leaving to help his parents support his siblings.  He proudly served his country as a Navy Seabee in the Pacific Theater in World War II and served stateside in the Army during the Korean Conflict.  He was one of nine brothers to serve their country and was a member of the American Legion Post 558, Plains, PA.

Bill retired from W.W. Davis Painting in 1986.  He was a member of St. Andrew Parish in Wilkes-Barre and was an active parishioner of St. Boniface Parish prior to its closing in 2010.

Bill was preceded in death by his wife of 58 years, Lois Wolsieffer Lewis in 2013 and by his brothers Fred,  Albert (Bert), John, Thomas, Frank, Lewis (Edgar) George, Michael, Charles (DoDo) along with sisters  Elizabeth, Helen, Anna and Joan (Charlotte).

Bill’s family would like to thank Dr. James Galasso and his staff, Dr. Jeffrey D’Andrea, Dr. Pramthesh Desai and the staff at Wilkes-Barre General Hospital for the kind, compassionate care they gave to their Dad.  They are also grateful to the Meadows Nursing Center.  During this difficult time please consider sending a card to an area nursing home or facility where visitor aren’t allowed.  These most fragile patients need constant reassurance that someone cares about them.

Due to current statewide restrictions, funeral services will be private from the Nat & Gawlas Funeral Home, Wilkes-Barre.  A Memorial Mass and celebration of Bill’s life will be held at a later date.

Contributions in Bill’s name are requested to be made to the Hope Center, 205 Main St., Luzerne, PA 18709 or the charity of the donor’s choice.

Online condolences may be sent by visiting Bill’s obituary at www.natandgawlas.com.