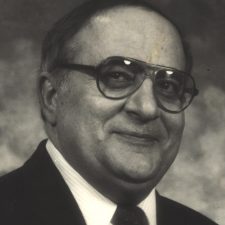 He was born in Wilkes-Barre, a son of the late Abraham and Jennie Solomon Obeid.  Bill was a graduate of Meyers High School and he attended King’s College.  He proudly served in the U.S. Army, during the Korean War.

For many years, Bill owned and operated Abe’s Hot Dog’s on Barney Street in Wilkes-Barre, retiring in 1995. The business was originally established in 1924 by his father, Abraham Obeid.

Bill was a devoted member of St. Mary’s Antiochian Orthodox Church in Wilkes-Barre, where he served as a subdeacon since 1993.  He was inducted into the Order of St. Ignatius, and he served as the chairman of the Eastern Region of St. Ignatius from 1987-1989. He was awarded the Silver Cross of Service in 1987 by Metropolitan Philip thrice remembered and Bishop Antoun. He embodied the value of hard work and generosity through his actions and spent his life in service to others, his family most of all. Bill also served as past president of the Northeastern Pennsylvania Restaurant Association.

Bill was a loving and devoted husband, father and grandfather, who will be sadly missed by his family and friends.

He was preceded in death by his brothers, James and Robert Obeid and his son, Mark.

Funeral service will be held on Saturday at 10 am in St. Mary’s Antiochian Orthodox Church, 905 S. Main Street, Wilkes-Barre.  The Very Rev. Father George Albert will officiate.  Interment will be in the Parish Cemetery, Hanover Township.

Family and friends may attend a visitation from 4-7 pm on Friday at the Church. A Trisagion prayer service will be held at 6:30 pm.

In lieu of flowers, memorial donations may be made to St. Mary’s Antiochian Orthodox Church, 905 S, Main Street, Wilkes-Barre, PA 18702.

Condolences may be sent by visiting Bill’s obituary at www.natandgawlas.com.